My spice cupboard is one of the most often used cupboards in my entire kitchen. It is also the messiest. I tackled my spice cupboard in an effort to not only organize it, but also take an inventory of what I have and when everything expires. Here is what my spice cupboard looked like before the overhaul took place:

Believe it or not there was some level of general organization in there. Oils, vinegars, and other related sauces are on the bottom shelf. Spices are all shoved into the middle shelf. The top shelf holds everything from birthday candles to cupcake liners to baking soda. All in all it’s a disaster.

Step 1: Emptying Out the  Spice Cupboard

I pulled everything out of the cupboard and set it on a side table, on the floor, and on surrounding counters. I was amazed at how much stuff fit in that cupboard. It covered one counter:

A TV tray and the floor under it:

And some of the drying rack:

There is nothing like a clean, empty cupboard. I see it as an empty palette ready for complete and total organization.

In order to better organize the cupboard, I bought inexpensive spice shelves and baskets to keep everything orderly.

I played around with the placement of the shelves and baskets, trying to maximize efficiency of space as well as make sure the things I use most frequently are readily visible.

Organization starts from the bottom up. I use the same general organization scheme I had previously, i.e. oils, vinegars, sauces, etc. on the bottom shelf, spices on the center shelf, and  duplicates, baking items, and miscellaneous “stuff” on top.

The bottom shelf is grouped into different categories: oils, vinegars, and sauces. The middle section holds things like sprays and other often used items:

I then worked my way forward, keeping everything in alphabetical order:

On the front shelf I kept with the alphabetical order, but made sure to save room for things like salt and pepper and anything else that is used on a frequent/daily basis:

Next I tackled the top shelf, putting any extra/duplicate spices in one bin, baking items like muffin tin liners, extracts, etc. in another, etc. I re-used two plastic bins I had had in the cupboard previously but cleaned them out and got rid of anything that had expired or leaked:

Finally I had a clean and organized spice cupboard:

Step 3: Taking an Inventory of the Spice Cupboard

While I was cleaning out the cupboard, I kept a running list of what I had, how many of each I had, and the related expiration dates. I created an inventory list for each shelf and affixed them to the cupboard door:

The same list also lives on Google Docs so I can refer to if I’m at the store and need to know what spices I have. I will update the Google Doc weekly before I go to the grocery store to make sure I have an accurate inventory. Too many times I would assume I didn’t have something and would end up with 5 things of Cinnamon. This has definitely helped cut down on duplicates and only buying the things I need when I need them. Below is what the actual spreadsheets look like:

Organizing the spice cupboard on a regular basis keeps it clean. Organizing it regularly also keeps you aware of what you have so you don’t waste anything. As a bonus it’s just so pretty! Organizing things brings me joy and helps to eliminate the chaos.

WANT TO REMEMBER THIS RECIPE? PIN THIS TO YOUR FAVORITE PINTEREST BOARD!! 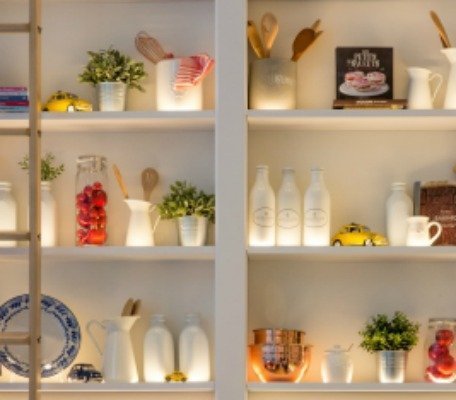